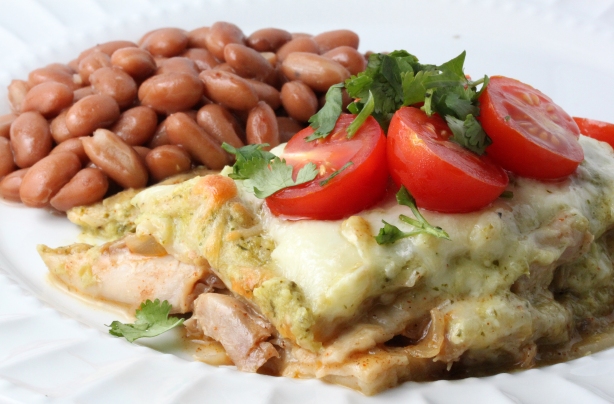 Wow. This is the best main dish that I’ve made in weeks. B and I both LOVED it and devoured it. I’ve wanted to try chilaquiles for a long time, but I really didn’t think that they would be that different from enchiladas, because they’re basically like enchiladas but in lasagna form. A layer of tortilla, a layer of filling, a layer of tortilla, and so on…topped with a sauce and cheese. So I came into this meal thinking that it would be much like an enchilada, but I was definitely wrong. The tortillas end up with a surprising and amazing texture, almost like the texture of dumplings. And since there are several layers of tortillas, you get a lot of that dumpling-like texture in every bite. Amazing. And I want to note that the green sauce in this recipe is the best green sauce that I’ve ever made, and I’ve tried many different recipes for enchiladas verdes. This is going to become my stock green sauce recipe. I really can’t rave enough about this entire recipe…it was so delicious that I think I might even prefer chilaquiles to enchiladas now. We devoured the whole pan in two nights. Oops.

Chicken Chilaquiles
Source: Adapted from The Crepes of Wrath

1. Heat a bit of oil or butter in a saute pan, and saute the onions until softened and slightly browned. Remove from the heat, and add the chicken, 1/4 cup of the pepper jack cheese, chili powder, salt, and pepper. Mix well to combine.

2. Add the half and half, cilantro, tomatillos, and green chiles in a food processor or blender and process until smooth.

4. Pour the tomatillo mixture over the tortillas, and then sprinkle with the remaining 1/2 cup of pepper jack cheese, or more if you like. Bake for 20 minutes or until bubbly.