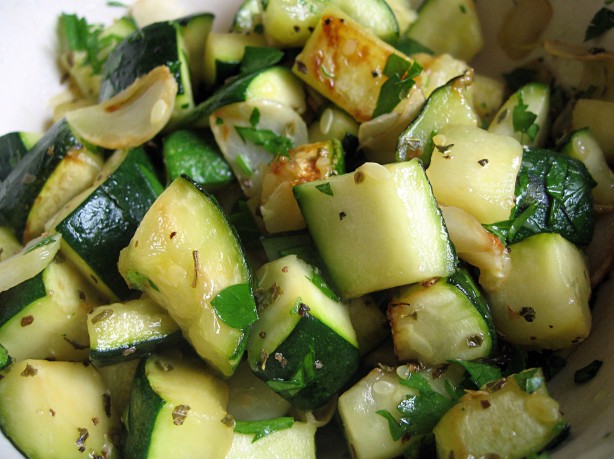 Inspiration: Over the weekend, I made Rick Bayless’ recipe for Mexican pork stew with smoky tomato sauce, potatoes, and avocado, and I thought that it might be nice to have a vegetable dish to go alongside. Bayless recommended this zucchini saute, so that’s what I decided to make.

What we Loved: This vegetable dish had an interesting combination of flavors. The combination of lime juice, parsley, and oregano as a dressing seemed odd to me, almost like a combination of Mexican and Greek flavors, but it really worked. In the end, the zucchini was very fresh and tart, and I loved the additional taste that came from the toasted garlic. The recipe uses five whole cloves of garlic, so the garlic flavor is fairly strong, which I loved. This was a nice and refreshing side dish alongside a heavy stew.

Helpful Hints: When cooking the zucchini, I found that it was helpful to arrange the zucchini cubes in a single layer in the pan and then let them cook without moving them, which helped to create a brown crust. I was a little rushed while making this dish, so at first I stirred the pan a little more than I should have. Next time, I would completely resist the urge to stir in order to allow the zucchini to brown more. If you don’t prefer parsley, cilantro would also work great in this dish.

1. Place the zucchini cubes in a colander, and sprinkle with approximately 1 teaspoon of kosher salt. Mix, and allow the zucchini to sit for 30 minutes. Rinse the zucchini, and pat dry with paper towels.

2. Heat a drizzle of extra virgin olive oil in a pan over medium heat. Add the garlic, and saute until browned, stirring often. Be careful not to burn the garlic. Remove the garlic with a slotted spoon, and set aside.

3. Place the zucchini cubes in the pan, and cook until browned but still crisp, approximately 10 minutes. Stir sparingly, allowing the zucchini to brown before flipping.

4. Turn off the heat, and return the garlic to the pan. Add the lime juice, oregano, salt and pepper, and parsley. Mix well and serve.

5 thoughts on “Sauteed Zucchini with Toasted Garlic and Lime”