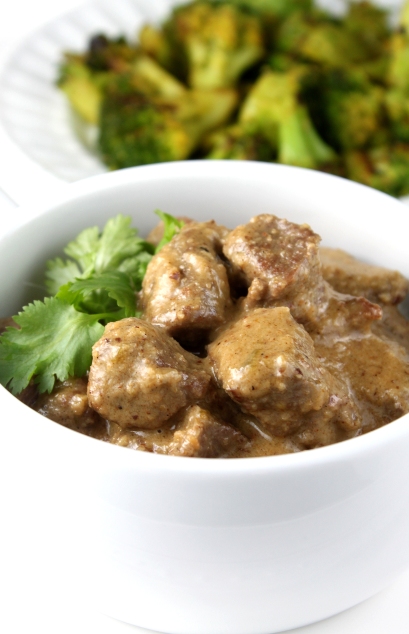 Inspiration: Brandon and I have been really into Indian food lately, and I’ve been having a lot of fun searching for Indian recipes and learning to make them at home. It’s such a fun, delicious cuisine.

What we Loved: As I was cooking this, I knew that it was going to turn out well because it smelled exactly like dishes that I’ve had at Indian restaurants before. I love the way that the smell of a recipe cooking can just take you places sometimes. And this curry turned out wonderfully. It was so incredibly rich with spices, from sweet spices like cinnamon to smoky spices like cumin, and it had a great layer of heat in the background. My favorite thing about Indian food is that incredible layering of spices. We also loved the creamy, silky sauce, which had a nice almond flavored base, and the lamb turned out incredibly tender. As noted on Mike’s Table, where I got the recipe, I was really pleased, too, that you could definitely taste the distinct flavor of the lamb. With such a complex sauce, I too was worried that you might not be able to taste the lamb itself, but its flavors were very pronounced and complemented the sauce perfectly. This is definitely a new favorite.

Helpful Hints: On Mike’s Table, he noted that his sauce ended up very thick, almost more like a crust to the meat. My sauce ended up as a creamy sauce, but I think if I would have continued cooking it longer, I could have gotten the same results as in the original recipe. I used 1/2 pound to a pound less meat, so I think that I would have needed to increase the cooking time in order for all of the sauce to be absorbed. But regardless of why or how the consistency of the two sauces turned out differently, I think that this recipe would taste great either way. So if you’d like a creamier sauce, cook for less time, and if you’d like a thicker sauce, cook away.

I made just a few adjustments to the recipe. Following is the recipe as I made it:

2. Puree the garlic, ginger, almonds, and water in a food processor until a paste is formed.

3. Heat a pat of butter in a saute pan, and brown the lamb in batches until there’s a slight brown crust on the sides, approximately 5 minutes. Set the lamb aside.

4.  Add the shallots and jalapenos to the fat that is still in the pan. If necessary, add another pat of butter. Saute until slightly browned.

5. Add the garlic paste and all of the spices to the pan. Stir for a few minutes, browning the mixture slightly.

6. Deglaze the pan with the cream and 1/2 cup water. Scrape all of the browned bits from the bottom of the pan. Return the lamb pieces to the pan. Cover partially, and simmer on low-medium heat for one hour, stirring occasionally. After one hour, if the sauce is too thin for your liking, remove the lid and continue simmering until it thickens to your preference.