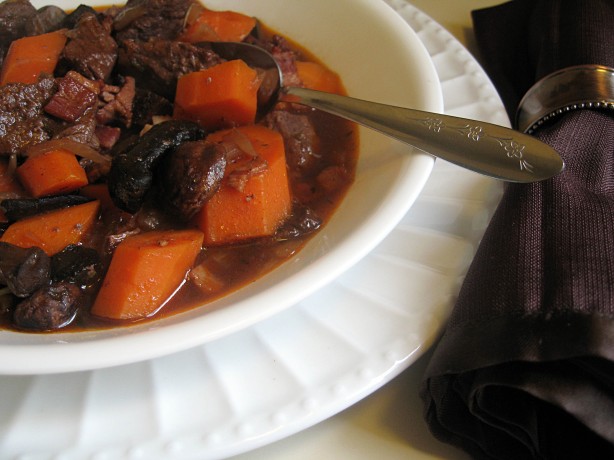 Inspiration: I’ve had this meal on my list to try for quite some time now. As I mentioned in my last post, I really love to use my time off during the week before Christmas to cook, and this was one of the first meals that I put on the menu.

What we Loved: B and I agreed that this dish was really unbeatable. I wouldn’t change a thing about it. My favorite aspect of the dish was the sauce, and I loved seeing all of the ingredients go into the pot as I was cooking to result in a sauce that was so layered and rich. The vegetables were cooked in the grease from the bacon and beef, and then the pan was deglazed with sweet brandy before red wine, beef broth, and seasonings were added in. The end result was a rich, earthy sauce that coated the meat and vegetables in flavor. Everything in the stew was incredibly tender, from the meat that fell apart in the bowl to the vegetables that were so soft and juicy as you bit into them. We really thought that this was a perfect recipe.

Helpful Hints: This recipe originally called for flour and butter to be swirled into the stew at the end. I skipped that step because we don’t use flour, and we really didn’t miss it. The sauce was fantastic just as it was, but if you’d like to thicken the sauce a bit, see Ina Garten’s original recipe.

2. Add the bacon to a large dutch oven. Saute for approximately 10 minutes, until lightly browned. Remove to a plate.

3. Sprinkle the beef cubes with salt and pepper. Sear the beef in the bacon grease for 3-5 minutes, turning to brown on all sides. Work in batches if necessary. Remove the seared cubes to the plate with the bacon.

4. Toss the carrots and the diced onions with 1 teaspoon of salt and 1 teaspoon of pepper in the fat in the pot. Cook for 10-15 minutes, until the onions are lightly browned. Add the garlic and cook for one more minute.

5. Add the cognac to the pan, scraping the brown bits from the bottom. Cook until the liquid is nearly evaporated.

6. Put the meat and bacon back in the pan. Add the wine and the beef broth, ensuring that the meat is covered. Add the tomato paste and thyme. Bring to a simmer, and place the pot in the oven for 1 1/2-2 hours, or until the meat and vegetables are very tender when pierced with a fork.

8. Place the stew on the stove top. Add the mushrooms, and bring to a boil. Reduce the heat, and simmer for 15 minutes or until the sauce is reduced to the desired consistency. Season to taste with salt and pepper before serving. 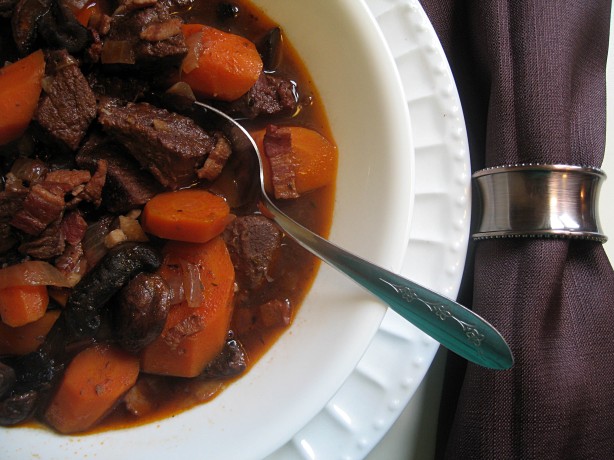