Inspiration: Brandon’s mom stopped by last week with a huge basket of fresh vegetables for us from their garden, including a pile of gorgeous eggplants and fresh tomatoes. Love.

What we Loved: This meal really surprised both of us. When I was planning it, I worried that the meal would be difficult to eat because of the arrangement, and most of all I worried that it would end up as a pile of mushy vegetables, which I would hate (particularly mushy eggplant!). However, we both thought that these were fantastic! To avoid the mushy factor, I took the eggplant slices out of the pan while they were still a little bit firm, and I cut my tomatoes into nice, thick slices. A fork and a steak knife cut these right into neat bites. You can’t tell from the pictures, but the eggplant slices had a wonderful browned crust, and the big dollops of oily pesto worked as such a fantastic, garlicy sauce. Is there anything more summer than this?

Helpful Hints: I think that it’s most important to use very fresh, crisp vegetables in this dish, because as I mentioned, I don’t think that mushy eggplant and tomato slices would leave you with a good meal. Taking the eggplant out of the pan before it got mushy and cutting the tomatoes into thick slices worked well for me.

1. Slice the eggplant into 8 thick slices. Place the slices in a colander, and sprinkle them well with salt. Let the slices sit for 30 minutes. This will help to draw the water out of the eggplant.

2. Rinse the salt from the eggplant, and pat the slices very dry with paper towels. Sprinkle with black pepper.

3. Heat a decent amount of butter in a saute pan, enough to coat the bottom of the pan. Add the eggplant slices, and saute until nicely browned on one side, approximately 5 minutes. Flip, and then saute the second side until the eggplant is browned on both sides and slightly softenened (but not mushy).

4. Just before the eggplant slices are done cooking, add slices of cheese to the top of each one to melt. 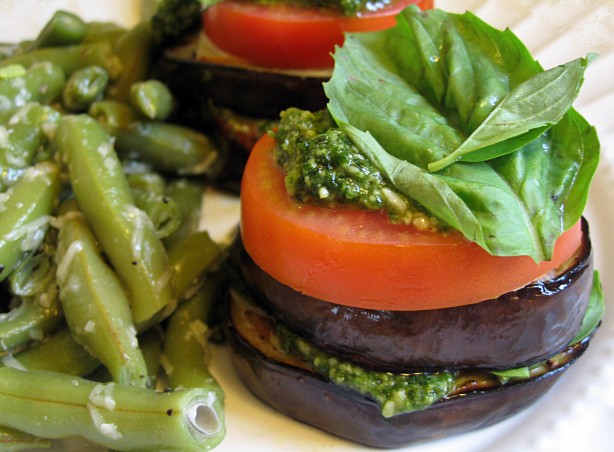