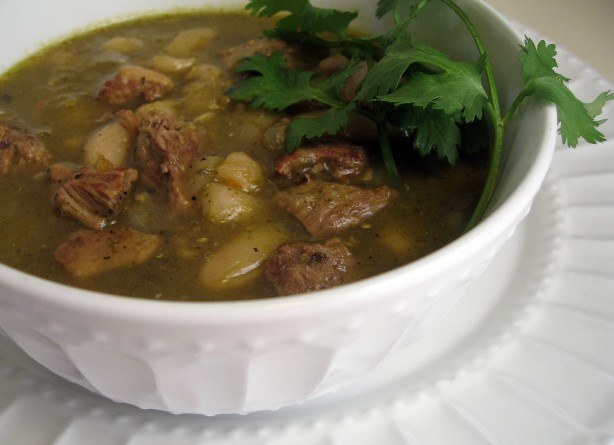 Inspiration: Brandon and I had a family chili cook-off to go to over Halloween weekend, and we always like to try to bring something different than a standard chili. Last time, we took our white chicken chili, and after some experimenting around this year, we settled on making chile verde doctored up to be a little more “chili-like” with a good bunch of cannellini beans and a few habeneros. Not a traditional chile verde per se, but something a little different!

What we Loved: Brandon and I both adore salsa verde and eat it all of the time, and this recipe is basically salsa verde in chili from. So for us, what’s not to love about the tart, spicy, fresh cilantro flavors of salsa verde mixed with tender pork and creamy cannelini beans? It’s really a great combination of flavors. The pork was fall-apart tender (maybe Brandon’s favorite part of the dish?), and we thought that the heat level was just right.

Helpful Hints: ﻿We made this chili a few times to get it just to our liking, so we learned a few things along the way. First, taking the time to cut your pork into nice small pieces is really worth it, because it makes the final result feel more like a chili than a stew or soup. But, it’s kind of a pain because pork shoulder is very fatty and therefore hard to cut. The second time around making this, I had my butcher chop my pork shoulder into stew-cut chunks, then I cut them down myself even further. Starting with a huge piece of pork shoulder yourself is not fun. Second, the cannellini beans make all of the difference in adding to the chili-like feel of the dish (in my opinion, at least). They’re not traditional to chile verde, but we like the flavor, and they add a remarkable substance/thickness. Third, plenty of salt is a definite must (just make sure to taste as you season). And fourth, you can vary the thickness and texture of this recipe depending on how much chicken stock you use. The chile verde in the picture above is a little thinner than other versions that I made, and the leftovers are always thicker, too.

Chile Verde with Cannellini Beans
Source: Adapted from For the Love of Cooking, originally from Arturo Vargas via Simply Recipes

I’ll post the recipe as I made it for the cook-off, which made a large crock-pot full of chili.

1. Place the tomatillos and poblanos cut-side down on a baking sheet. Add the unpeeled garlic cloves. Broil until the top of the vegetables are blackened, about 8 minutes.

3. Place the tomatillos, poblanos, garlic, cilantro, and jalapenos in a food processor, and process until smooth.

4. Season the pork well with salt, pepper, and oregano. Saute in batches until nicely browned, and set aside.

5. Add the onions to the same pan, and cook until softened, scraping the browned bits from the bottom of the pan and incorporating into the onions. Mix in the garlic and habeneros, and cook for an additional minute.

6. Place the pork, onion mixture, cannelini beans, and tomatillo sauce mixture into a crock pot. Mix well, and then add the chicken stock until the thickness is to your preference.