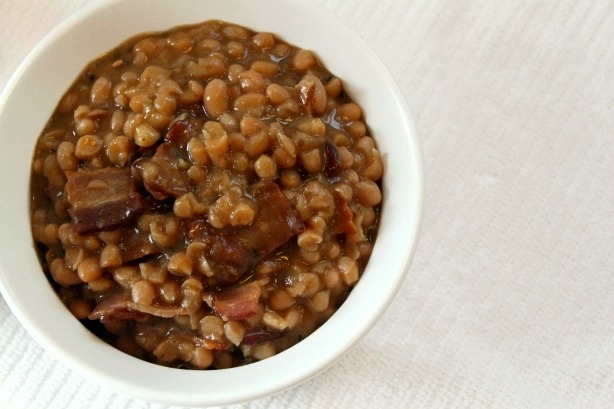 Inspiration: Ahhhhh beer. I think it’s safe to say that it’s our number one obsession right now. We have a lot of favorites, but Belgian beers are a style that both of us would list at the very top. Over the past few years we’ve done a lot of…..research?…..and have fallen in love with both the very characteristic and unique flavor of true Belgian beers as well as the great interpretations in the American craft brew scene. So how could I pass by a recipe like this?

What we Loved: For a couple of beer lovers like us, these were wonderful. The fantastically rich beer flavor absorbed itself into everything in the dish, resulting in a rich ale taste with just a slight touch of bitterness (not bad bitter, but bitterness like you’d find in a something like a pale ale). We used some pretty complex beers, which I’m sure impacted the flavor of the final dish pretty directly. And for us, it was great! I was also so pleased with the texture/sauce of the final dish, which was thick and creamy just like a great baked bean recipe should be. And of course, the big pieces of bacon added some nice texture and that fabulous bacon flavor.

Helpful Hints: I let these beans cook in a crock pot since I had to work all day, but the original recipe called for them to be baked in the oven for 2-3 hours. The crock pot worked just fine, though there was still quite a lot of liquid left at the end of cooking. I just transferred my stove top-safe insert to the stove (so convenient!) and boiled the beans until they were nice and thick (about 20 minutes). If you don’t have a stove top-safe insert and transferring to the stove is too much work, you could also try turning your crock pot to high, but I would probably recommend just cooking as originally instructed at The Bitten Word. Also – I used a couple of Belgian style American craft beers that we had around the house (Dark Horse Sapient Trip Ale and Troeg’s DreamWeaver Wheat, if you’re interested). We loved the resulting beer flavor, but if you’re not a huge beer fan like we are, I would recommend sticking with something lighter like Blue Moon for a more subtle beer flavor.

I made these in a crock pot with a stove top-safe insert, so that’s what I will give instructions for.

1. Saute the bacon in a your stove top-safe insert until crisp and browned. Remove the bacon and reserve. Drain most of the extraneous fat.

2. Add the onions to the insert, and cook until softened and beginning to brown. Add the garlic and cook for a minute more.

3. Add the mustard, a good sprinkle of thyme and oregano, beans, beer, and stock. Season well with salt and pepper.

4. Place the insert in the crock pot, and cook on low for 8 hours. If there is too much liquid at this point, transfer the insert to the stove top and bring to a boil until the mixture reduces and thickens.

5. Return the reserved bacon to the insert. Season to taste with additional salt, pepper, and 1-2 tablespoons of cider vinegar.

6. Serve as desired. I served ours atop chopped romaine hearts with crumbled goat cheese. 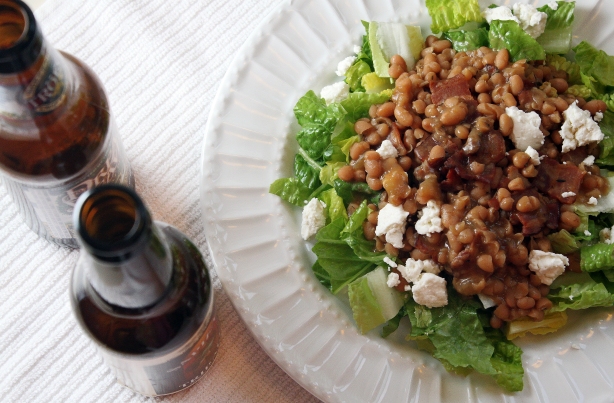 One thought on “White Beans with Belgian Style Beer”