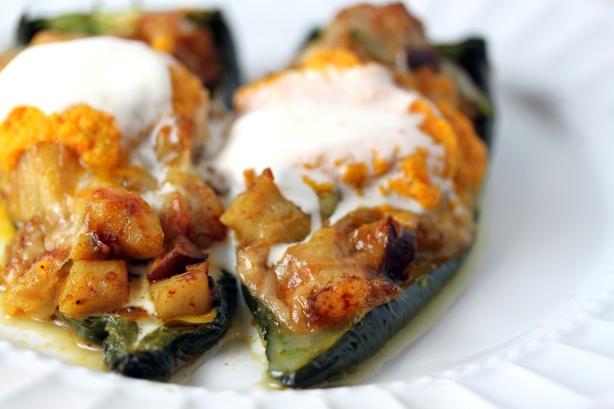 Inspiration: Growing up, my parents always let us kids choose whatever dinner that we wanted my Mom to cook for our birthdays. I always got so excited about that and loved the tradition, so I plan to do the same for my kids one day. For now, I keep the tradition alive by letting Brandon pick a special dinner, and for his birthday a few days ago, he chose quite the meal – this fabulous recipe from a local chef, Eve Aronoff. We just bought her cookbook from her old restaurant, Eve (so sad that it closed down!), and the recipes in that book all sound so good that I’m tempted to cook from no other source for a couple of months. I’m sure that the husband would not object. Happy 28th, Brandon!

What We Loved: Everything. There was not a single aspect of this dish that was anything less than perfect, so I don’t really even know where to start. The concept of the meal is awesome in its own right – a sort of Indian/Mexican fusion – and the end result has great components of each of those cuisines that work perfectly together. The poblano peppers have that spicy, earthy flavor that I’ve come to associate with Mexican food, and the filling is flavored with both Mexican and Indian spices. To top everything off, melted smoked mozzarella and creme fraiche bring back that Mexican feel, while the carrot puree is again something that I would more closely associate with an Indian dish. Fantastic! As for the flavors of the meal, we were completely blown away by all of the layers and how well everything worked together. The seafood was perfectly succulent and tender (which really surprised me – I was worried about the seafood overcooking since it is sauteed and then baked), the andouille provided just a little heat, and the rest of the seasonings and spices added this rich, intense flavor that I can only describe as a Mexican curry. The carrot puree on top was another surprising aspect of the dish, because it didn’t have a strong carrot flavor in the slightest (and for two people like us who don’t love carrots, that’s a great thing). Instead, it had a very mellow vegetable flavor that was very crisp and refreshing atop the stronger, bolder flavors of the stuffed peppers. The dollop of cool creme fraiche (I just love how it melted down into the hot peppers like it did!) was the perfect finishing touch. This meal as a whole is quite truthfully one of the best things that I have ever made.

Tips: The original recipe calls for two separate seasoning mixes. Instead of making the mixes in big batches as they’re written in the cookbook and having a lot of leftovers, I basically just sprinkled the spices into the pan in what I thought were the appropriate proportions (to total about 2-3 teaspoons of spice). I’ll list the spices below that I included, but as a general guideline I went heavy on the curry powder, chili powder, and paprika, with smaller sprinklings of the rest of the seasonings. I used the same method with the carrot puree, scaling everything down to make about 1/2 cup. I’ll list the approximate amounts that I used, but the amounts are very rough estimates. It would be best to taste test as you go along, and adjust the levels as you see fit. 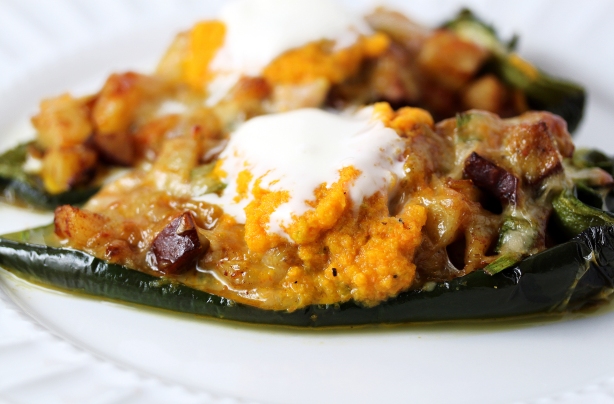 1. Drizzle the halved poblanos with olive oil, and sprinkle with salt and pepper. Roast in a 425 degree oven until tender, about 10 minutes. Remove and set aside.

2. Heat a pat of butter in a saute pan. Add the onions, garlic, and jalapenos, and cook for about 3-4 minutes on low until softened. Season with Kosher salt, black pepper, curry powder, coriander, turmeric, chili powder, paprika, garlic powder, cumin, and oregano (to total about 2-3 teaspoons of spice).

3. Add the seafood and andouille, and saute until the seafood just barely loses translucency.

4. Remove the pan from the heat, and transfer the contents to a mixing bowl. Add the green onions and sriracha, and stir to combine. Adjust the seasonings to taste.

5. Divide the stuffing between the six poblano halves. Sprinkle each with shredded smoked mozzarella. Bake in a 425 oven for 15 minutes.

6. Serve topped with a dollop of carrot lime puree and creme fraiche.

2. Slowly add the olive oil while the food processor is running to emulsify.

3. Season to taste with salt and pepper. 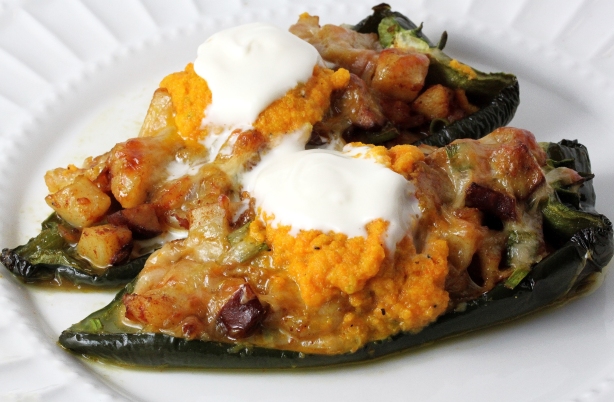 8 thoughts on “Poblano Peppers stuffed with Curried Shrimp, Scallops, and Andouille and topped with Carrot Puree and Creme Fraiche”