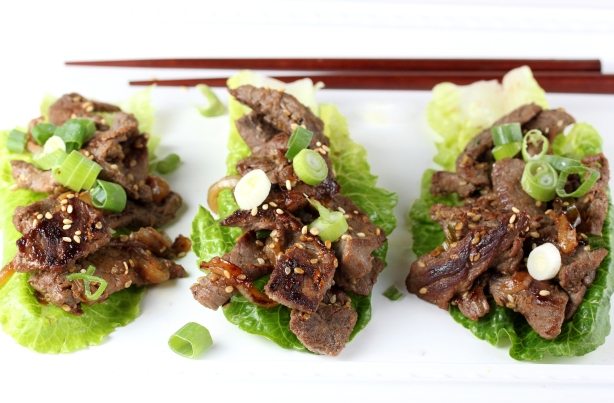 Inspiration: While Brandon was finishing up his degree during the last several years, he used to eat at some awesome Korean restaurants near campus every now and then, and apparently bulgogi was one of his main loves in life. Who knew? Once this information came to light, it was only a matter of time before it made it onto our menu at home. There aren’t many things that I love more than discovering and making new foods at home.

What We Loved: I’ll hand it to Brandon here – he’s converted me to a bulgogi fan. This recipe was pretty darn delicious. The meat had a rich, savory taste characterized by the great flavors of soy, sesame oil/toasted sesame seeds, and garlic, and there were lovely background hints of lemony ginger. The meat had a nice overall sweetness and left you with just the perfect kick of spice in your mouth, too. Such a great balance. The crisp romaine hearts added the perfect cooling and fresh contrast, and I just loved how the marinade began to caramelize onto the meat as it cooked and browned. Fantastic.

Tips: We rarely, rarely use sugar in any form in any recipes (I’d say we use it a few times per year, tops). However, this is one of the few recipes that does include it, unlike most other recipes on our blog – but since Brandon loves it so much, I wanted to make it authentically for a nice treat. If I’m going to make something with sugar, I always prefer to use real, natural sugar versus sugar substitutes, so I used organic cane sugar in this recipe. I’m wondering if honey would also work – I might give that a go next time as it’s usually my sweetener of choice. Also, if you don’t buy your beef pre-sliced, it works great to just throw it into the freezer and then slice the meat when it’s about half-frozen, which really allows for very easy slicing.

2. Add the beef, onions, and green onions to the bowl. Use your hands to mix and massage the marinade into the beef and onions.

3. Cover and refrigerate for at least an hour (I marinated ours for four hours).

4. Pan fry the beef and onions in batches on a very hot frying pan until each side is cooked and the edges of the meat are browning and crisping.