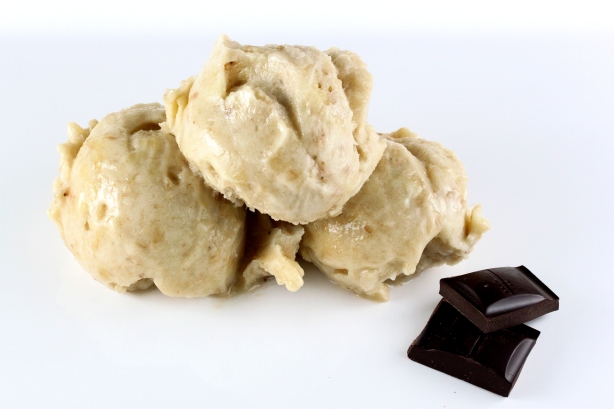 Inspiration: This is one of those recipes that I’ve seen all over the internet for about a year now. I always just figured it was too good to be true, like I’ve found most recipes to be that are substitutes for the real thing. But when I ended up with a slew of extra bananas that I really didn’t feel like eating after we had taken them along for snacks on a road trip…..well, there really was no choice but to throw those babies into the freezer and wait for an ice cream sort of day.

What We Loved: We both really enjoyed this as a substitute for ice cream. Like most things that are substitutes, it’s not the same as the real thing, but it’s pretty darn good just the same. It’s hard to believe that one simple ingredient can be turned into such a creamy treat, but it really does work. The texture is delightfully creamy, and the taste is wonderfully banana and refreshing. What a nice and surprising treat.

Tips: You’ll need to scrape down the sides of the food processor often while making this. Don’t be discouraged if it looks like the recipe isn’t going to work – it’ll come together in time. I also think that this would be great with almond butter mixed in, or maybe with a little dark chocolate melted and poured over top.

One Ingredient Banana Ice Cream
Source: All over the internet

1. Peel the bananas and cut them into slices. Place the slices into the freezer for a least a few hours to freeze (I actually had mine in there for about a month).

3. Eat the ice cream as is, or place it back into the freezer to harden further before serving.