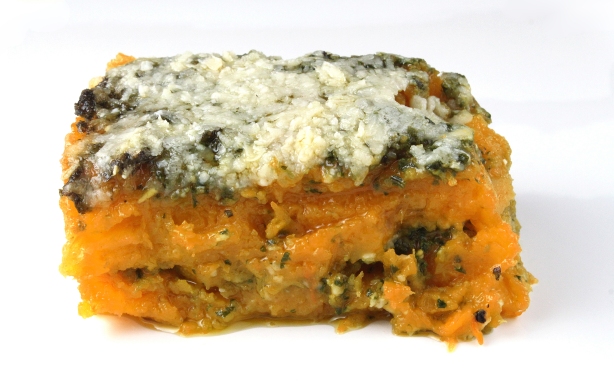 Inspiration: I tend to focus so much on main dishes that I often don’t do much in the way of sides. When I stumbled across this recipe from Giada, I was so intrigued with the flavor combination that I couldn’t wait to make it. I debated using it as a main dish with some sauteed broccoli alongside or as a side dish alongside some sauteed chicken, and I ended up doing the latter to make for a more filling meal. Since as a side dish, this was more elaborate than what I typically do, I used it as an opportunity to cook a really simple main dish – which is something that I typically don’t do. All I did was throw some butter and chicken cutlets in a pan, and saute them up with some salt and pepper. It was kind of fun to switch it up and focus on the side for a change.

What We Loved: As I expected, I really enjoyed this dish. As a girl who adores butternut squash and loves pesto, I had a pretty good idea that this would be a winner in my eyes. I never would have thought to combine the two ingredients, though, and I was really pleased with how well they complemented each other. The warm, comforting, slightly sweet squash was a great balance to the rich, garlicky pesto. I loved how this dish was great for the transition between summer and fall – the pesto was a nice nod to summer, and the squash was a great welcome to fall. The original recipe calls for the squash to be pureed in a food processor, but I used a potato masher to mash just about half of the squash. This allowed me to leave several nice big chunks of squash throughout the casserole, which really added a fabulous substance and texture. And of course, you can never go wrong throwing some nutty Parmesan cheese into the mix.

Tips: Next time, I would definitely add more pesto and more Parmesan. I already upped the amount from the original recipe, but I still think that a nice fat layer of pesto and cheese would taste even better, rather than the somewhat sparse amount that is ribboned throughout the casserole as is. It really depends on your preferences, though – as it was, this dish really highlighted the squash flavor with some nice accents, rather than being more of a cheesy gratin.

1. Add a few inches of water to a large bot, and bring to a boil. Reduce to a simmer, and place a steamer insert into the pot. Place the butternut squash pieces in the steamer, cover with a lid, and let steam until the squash is tender, about 20 minutes.

2. Place the squash pieces in a large bowl, and mash with a potato masher until you reach the desired consistency. I mashed about half, leaving several nice large chunks of squash throughout.

3. Butter an 8×8 baking dish. Layer in half of the squash, half of the pesto, and half of the cheese. Repeat with a second layer.

4. Dot with butter and bake at 350 degrees F for about 40 minutes, until hot and bubbly.

15 thoughts on “Butternut Squash Casserole with Pesto and Parmesan”