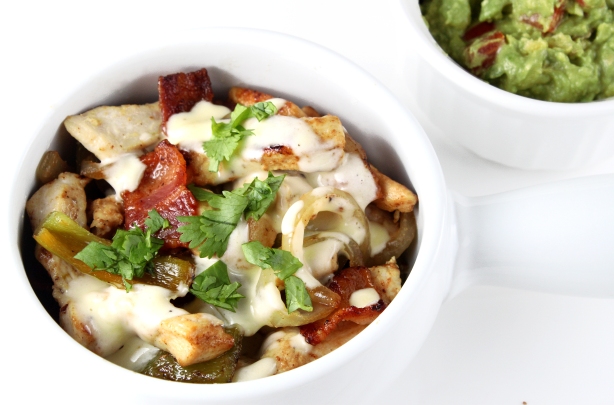 Inspiration: Like a few other recipes on our blog, this one comes to you via some more inspiration from El Salto, the restaurant that we like to frequent with my parents. I’ve been on a pollo fundido kick there recently, ordering a dish similar to this nearly every time that we stop in. Their dish doesn’t have bacon included, but Brandon always orders a similar dish that has beef and bacon instead of chicken, so I decided to make a mixture of the two. Adding bacon to a dish is never a bad idea, after all. Here’s to El Salto for their awesome food and some awesome inspiration.

What We Loved: This recipe just might be a new weeknight staple for us. It’s a snap to throw together and results in a nice and flavorful Mexican meal. Like the chipotle shrimp that we previously made, it turned out differently than the restaurant version, but I really think that it was every bit as good – just in a different way. I truly love dishes that meld all of the ingredients together so that each bite has a myriad of different flavors, and this dish does exactly that. With every forkful, there’s a bit of rich bacon and onions, some super tender chicken, and a tiny kick of heat from the poblanos. Plus, the chihuahua cheese melts and oozes down into everything, providing a fantastic, cheesy glue. You can’t beat that.

Tips: We love chihuahua cheese because it’s a really great Mexican melting cheese, so I would really recommend trying to find it, if you can. It has a wonderful texture and really just oozes down into the dish in an awesome way. We always buy ours at Whole Foods. If you can’t find it, though, Monterey Jack might be an okay substitute.

1. Place the bacon into a saute pan over medium heat. Saute until cooked through and crispy. Remove with a slotted spoon and set aside.

2. Add the pepper slices, onion slices, and chicken slices to the pan, and season with Kosher salt and black pepper. Stir to combine, and continue cooking until the chicken is cooked through, the vegetables are softened, and everything is starting to nicely brown and caramelize.

3. Meanwhile, add a good handful of cheese and several tablespoons of cream to a small sauce pan. Heat over low heat until a nice sauce forms. Add more cheese or cream as necessary to get a nice, thick consistency. Season with salt and pepper.

4. Remove the pan with the chicken mixture from the heat. Add the bacon back into the pan, stirring to combine.

5. Serve the chicken mixture topped with the cheese sauce and fresh cilantro.