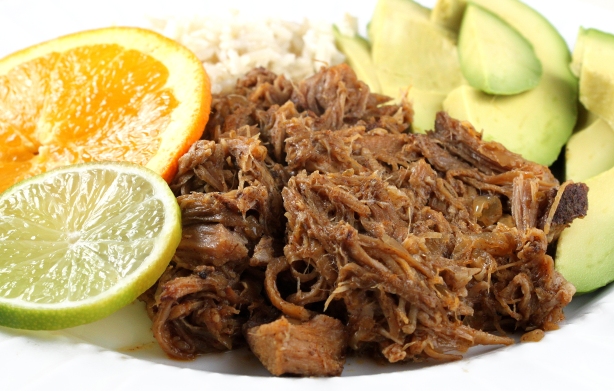 Inspiration: It’s a balmy 31 degrees here today, and it was something similar on the day that I made this recipe. Sometimes you just need a nice summery meal with a good island feel to it in the midst of winter, you know? It won’t be long until we’re back in flip-flops, celebrating Ben’s first summer with him. But until then….well, we’ll just eat some avocados and some citrus every now and then, right?

What We Loved: Usually with pulled meats or meats that are slow cooked in the crock pot all day, I think of the end result as being very rich. What was nice about this recipe was that the pork was citrusy light and summery, with a nice touch of sweetness. We really loved the bright orange and lime flavors. I served this with avocado slices and coconut ginger rice, which made lovely accompaniments and really complemented the pork well. I might just list a good pulled pork as my favorite meal, and this one didn’t disappoint.

Tips: The pork mixture is very thin/watery at the end of cooking, so I would recommend cooking uncovered on high for about an hour to reduce the liquid. I have a stove top-safe crock pot insert, so I was able to just put the insert on the stove and boil away until the mixture was nice and thick. I will include instructions for a normal slow cooker below.

1. Rub the pork shoulder all over with oil and mustard. Season liberally with salt and pepper.

2. Combine the cayenne, allspice, chili powder, cumin, paprika, cinnamon, and oregano in a small bowl. Rub the mixture all over the pork. Wrap the pork in plastic, and refrigerate overnight.

3. Place the pork in a slow cooker. Add the onions, garlic, honey, orange juice, lime juice, and chicken broth. Cover and cook on low for seven hours. Shred the meat, and then uncover and cook on high for about an hour, until most of the liquid evaporates and the mixture is thick.